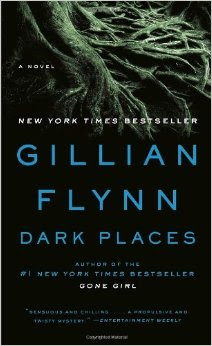 Gillian Flynn’s Dark Places indeed deals with some dark issues, all centered on a character, Libby, who comes across as abrasive and unlikeable, yet she is still understandable and I was able to develop some empathy for her throughout the novel. I also personally enjoyed how the story was told as a series of present-day versus past event chapters, that alternated with one another to reveal different information from the viewpoint of different characters in a more staggered manner. This made the pacing interesting but not too straight-forward, and let me try and come up with my own theories along the way before the ultimate conclusion. Though at some points, I would get so interested in the past events of a chapter that I wouldn’t want to switch back to Libby in the present day just at that moment.

Dark Places focuses on the life of Libby Day, 25 years after her brother, Ben, was charged with the murder of Libby’s mother and two older sisters when they were all children. Ben would have been 15 at the time, with Libby being around 7. Unsurprisingly, Libby has had a hard time adjusting to life after these events, and still holds some residual effects of experiencing such traumatic circumstances at such a young age. This leaves her now, 25 after, in a difficult financial position. Yet, she sees the opportunity to help herself make some money by agreeing to talk to people from her past regarding the night of the murders, after meeting with a club of sorts that like to investigate high-profile murders. One group, in particular, has been looking at her case and has come to a number of different conclusions regarding who may have in fact murdered her mother and sisters all those years ago. Libby had testified against her brother, but now she has to face the possibility that maybe he did not in fact commit the crime, and that her memory of that night does have some holes in it. Essentially we the reader are led to try and figure out what exactly occurred on the night of the Day murders while Libby herself seeks out information herself.

Along the way, we encounter a number of different topics, including guilt, financial difficulty, martial abuse, satanic rituals, peer pressure, and even the ever-tricky subject of child sexual abuse. That last point is a particularly difficult topic to address, and it just happens that I had recently watched Jatgen (The Hunt) with Mads Mikkelsen before reading this, which also dealt with the subject of children’s claims and accounts of sexual abuse that may or may not be accurate, and this is something that in my field of study can come up and needs to be dealt with in a very specific manner. When addressing such cases, you have to believe the child, and the child needs to know that you trust them no matter what they say. But as it is mentioned in Dark Places, the way in which children are questioned or treated in regards to incidents of sexual abuse is one that can sometimes sway children to behave in a particular way or say things that they think the adults want to hear, possibly even creating new memories of events. It is a hard thing to address, and something that I get really intense about, and I don’t really know how I feel about the way the subject was handled in this book to be honest (that is not necessarily a bad thing), but I think I need to reflect on it a little more before I’ll know for sure.

In any case, I did get quite engrossed in Dark Places and the predictably dark subject matter. It doesn’t take long to get involved in making your own theories about what might have happened to the Day family, as slowly more and more information of the day leading up the murders is revealed. And really you just need to know what happened, so you keep reading. That’s what I found at least! And now I am definitely going to lend this one to a few friends who I think would also enjoy it.

[Be sure to visit the Cannonball Read main site!]
Posted by Lisa Bee at Sunday, October 18, 2015 No comments: