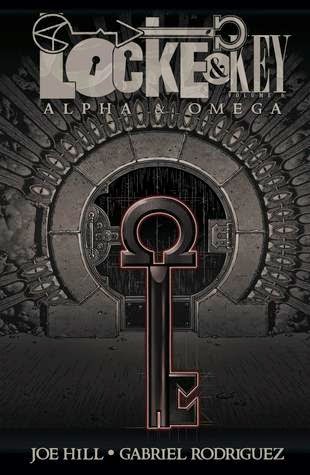 The concluding volume of Joe Hill and Gabriel Rodriguez’s comic series Locke & Key is full of carnage, and I didn’t expect anything different. There is resolution, and yet so many more mysteries left to be explored in this world and with all the magical keys and the history of key house. The only truly bad thing about this book was that it had to end, after everything came to a head and we were left to see where the resulting pieces would end up.

“Alpha & Omega” takes us to the night of prom for the Locke children, as they plan to have an after-party rave in the caverns by their the Lovecraft house. But Bode, still possessed by the spirit of Luke/”Dodge,” has other ideas for how the night shall end, as he appears to hold all the cards in his little game: with almost all of the magical keys in his possession, and no one aware that he is not in fact Bode anymore, Luke is free to play a game that results in his ultimate quest for a world of select loyal followers and slaves. But there is one hitch in his plan, the unlikely hero of mentally disabled, Rufus, who knows more than he is given credit for.

I knew that things were going to come to a breaking point in this volume, like one final showdown of the Locke’s versus the demon inside their once friend, now family member. And it certainly didn’t disappoint, with expressive language, engaging artwork, and somewhat devastating results. There are so many intriguing characters in this series and some moments of real emotion that I just can’t stop gushing. (Okay, maybe the feelings I had were slighty related to the somewhat disheartened state my heart was already in upon learning of Zayn’s departure from One Direction. Fight me about it). There is one scene in the concluding little section where loose ends are being tied that I can’t fully wrap my head around, but I enjoyed it nonetheless.

In all honesty, I would recommend this series to a lot of people, especially if you like things that are imaginative, full of mystery, and aren’t afraid for things to get pretty dark at times (even within the first part of the first book in this series we experience intense scenes of blood and butchery). They are all unique and I always ended up reading them super quickly due to how enthralled I was. Maybe a re-read will be in order to see if I catch new things that I didn’t the first time around?

[Be sure to visit the Cannonball Read main site!]
Posted by Lisa Bee at Wednesday, March 25, 2015 No comments: 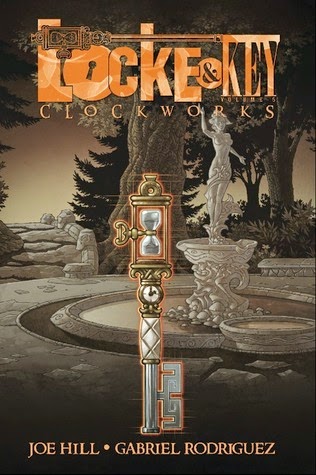 The penultimate collected volume of Joe Hill’s Locke & Key series (illustrated by Gabriel Rodriguez) provides some history regarding the Lovecraft residence, the history of the magical keys, and how the patriarch of the Locke family became implicated in the history of the house and what is occurring now, back when he was just a teenager. Unlike the previous volumes of this dark and inventive series, past events are the focus of “Clockworks,” and we get some answers as to what the house and keys are all about, and even where they came from. Yet many things remain up in the air, which I am excited to unravel in the concluding book, “Omega”.

“Clockworks” begins with a tale of a young blacksmith named Ben Locke in the Revolutionary War. Most of his family has been killed for harboring fugitives in the caves below Lovecraft, where a door to a demonic world has been found. Ben Locke works to create a lock and key in order to keep this door shut for forever, but also uses some of the metal that has come through the door in order to make other magical keys. These of course become the keys that the present-day Locke children keep finding around their house.

Upon finding a key that allows them to visit the past as spirits (kind of in a Christmas Carol sort of way), Tyler and Kinsey Locke find this history, and also visit that of their father as a teenager. Their father had been staying at Lovecraft with some friends one year, and it is learned that only children can see and remember the magic of the keys, as a sort of safety trap that ensures no corrupt adult would ever be able to use this magic as a tool for war. Yet the past reveals just how Luke/”Dodge” ended up the way he is today: infected with the spirit of a demon that came through the door that was locked all those years ago. Meanwhile, little Bode lock is searching for the omega key which is what will once again open this door, for as we know from the previous book, “Keeper of the Keys,” Bode isn’t really Bode.

This series is grittier than I realized (not that that is a bad thing, and I really don't know why I'm so surprised by this), and full of imagination, magic, and mystery. Sometimes I get a little thrown off by the language and slurs used at people (oh no, I'm sensitive), but at the same time, isn’t that how people talk when they want to hurt someone? Also, it reflects some of the time-periods in which these events take place, so ultimately it works. All I know for certain in these stories in that there is a final showdown and tragedy on the horizon, where hopefully all the lingering questions I have will be answered and things will come to a head.

[Be sure to visit the Cannonball Read main site!]
Posted by Lisa Bee at Monday, March 23, 2015 No comments: 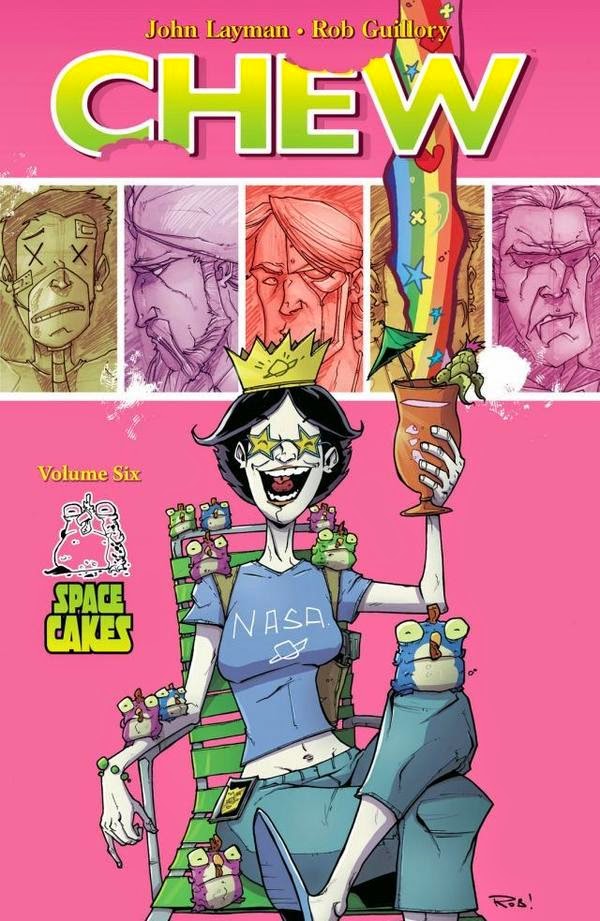 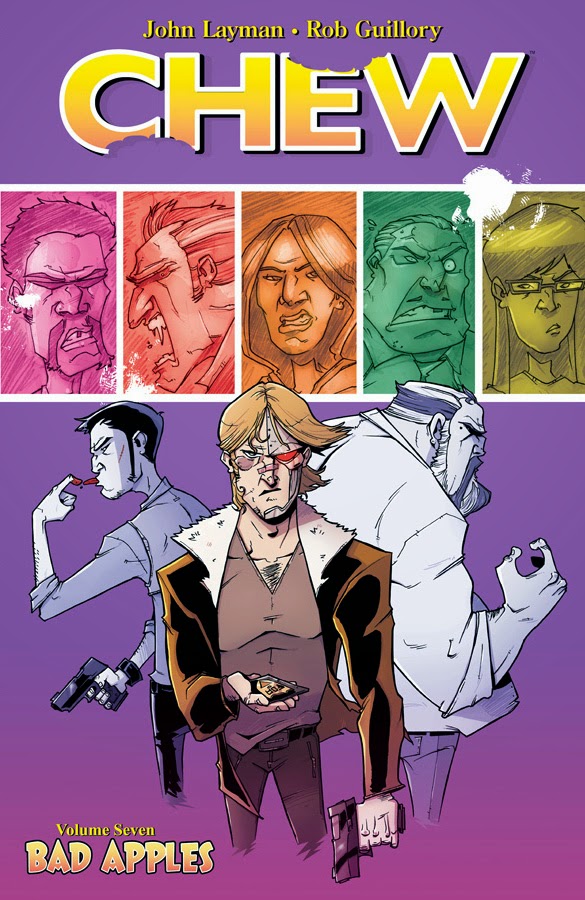 I seem to go through this comic book series in little stints. I’ll read a few, then take a break until I acquire some more, and then take another break. And while a few details always get lost here and there, it always manages to draw me back and I start to remember where I left off almost immediately. It’s different and fun, but also dark and dirty at parts, and the drawing style of Rob Guillory really reflects this dichotomy of moods and feelings constantly present within the Chew series: sometime you wonder why people are rendered with such strange proportions or images will be humorously exaggerated, only to then flip the page and find something grotesque on the other side. And yet it works: both the story itself and the drawing is engaging and unique, though I will say that I know a few people who are not particularly fans of the art style of Guillory.

In any case, Space Cakes and Bad Apples picks up some plotlines of the previous Chew installments that were almost starting to seem like they were scattering all over the place without coming together. But now they are! We continue following Tony Chu and his chibopathy (the ability to get a psychic vision of the past life of anything he eats) after he is found almost beaten to death by a hostage taking in volume 5. But in Space Cakes there is an increased focus on Tony’s sister, Toni, and her cibovoyant abilities (the ability to see the future of any living thing she eats, including any humans she bites in to). Toni becomes involved in some food-related cases due to her work with NASA, and her abilities are ultimately discovered by the Vampire who is collecting people with food-related abilities. These events lead to some tragic events that end up sparking a new fire in Tony to go after the Vampire, and I am curious to see how this plays out. These two volumes also feature a new role for Poyo, the killing-machine of a rooster, so that is of course ridiculous yet incredibly amusing.

With a host of new food abilities displayed in these two volumes (some of which are incredibly useless), as well as a collection of intriguing supporting characters (Tony’s ridiculous half-cyborg partner, John Colby, being a personal favourite), nothing is ever boring in Chew. Though sometimes it can be a bit gross or absurd. Because of that, it’s really hard to know who to recommend this series to; I enjoy it a lot, but I know that it would definitely not be well received by some people that I know. All I can say to summarize this reading experience is that it’s bizarre but in a really good way.

[Be sure to visit the Cannonball Read main site!]
Posted by Lisa Bee at Monday, March 16, 2015 No comments: 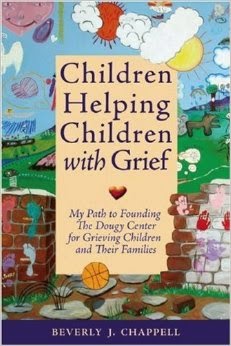 Goodness, February was a hectic month. I feel like so much happened in such a short span of time: too much happened, really! Because I never even had a chance to finish any reading until now, just as I head into a school course focusing on grief and loss.

Beverly Chappell’s book, Children Helping Children with Grief: My Path to Founding the Dougy Center for Grieving Children and their Families does basically exactly what the title implies. It recount’s stories of Chappell and her husband working with various families and children who are experiencing family losses, and how these experiences influenced the ultimate creation of the Dougy Center for grieving children. It also recounts how some other influential people come to become involved with the center as well.

These stories are all told from a personal place, and are often touching to hear. However, being that this was a book that I was required to read for a school course, I was surprised and a little disappointed that there was no real, in-depth insight into how children are able to help other children with the grief process. Sure, there are touches here and there, but the overall method and how this might work is never really expanded on. So aside from being a nice story of the creation of the Dougy Center, I’m not sure I got a whole lot out of it.

But the one thing that will stick with me after reading this more than anything else is a reminder of the fact that children often know that something is going on when a family experiences a loss, yet they are often not involved in the grief process in the same way that adults are: adults are scared of how this information might affect the child, and so they do not explain fully what happened, or they explain the death to the child in a way that the child does not understand. It is difficult to say what exactly the best course of action is in any situation, but knowing that children are resilient and just need to process their experiences in their own way is important to remember. So we shall see what else I learn in the next week to come.

For now, I will say that this book was not challenging to read and is interesting in it’s own way. I just feel like I wanted something a bit different out of it.

[Be sure to visit the Cannonball Read main site!]
Posted by Lisa Bee at Wednesday, March 04, 2015 No comments: