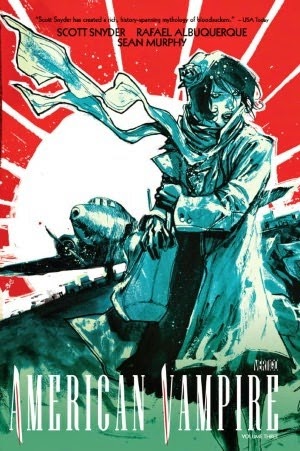 I have this problem where I always say I’m going to read the next volume or book in a series as soon as I can, but since I always have so many series on the go, it ends up being far too long before I actually get reading the next installment. In any case, it’s been a while since I’ve read any American Vampire, but fortunately I seemed to remember most of the characters and what-have-yous from the previous volumes when I picked up this third collection of issues #12-18.

Volume 3 is split into two major stories, both set within the timeframe of World War II. The first tale, “Ghost War” focuses on the vampire Pearl’s husband, Henry, as he goes on a mission to Japan in the hunt of a new breed of vampire, only to find an island with an infestation that is far more than he (and a tag-along Skinner Sweet) had bargained for. The second half focuses on a miniseries entitled “Survival of the Fittest,” with vampire hunters Felicia Book and Cash McCogan going to Nazi-occupied Romania in search of a cure for vampirism, that Felicia desperately wants in order to remove the non-manifested vampiric blood she has in her veins, while Cash wants to use the cure on his vampire son. But when they go, they find that perhaps their enemies at war are not necessarily searching for a cure, but to ally with the creatures of the night, while the doctor searching for the vampiric cure has other ideas in mind regarding the awakening of great vampires of ancient history.

As per usual, the action is fast-paced, and the story of the vampire bloodlines and evolution is very interesting as we continue our trek through history. The only thing that I was having trouble with was discerning certain character faces from one another at different times, particularly the soldiers while they were in Japan. But I don’t know, maybe that’s just me. In any case, this may not be my favourite comic-book series, but I still enjoy it quite a bit nonetheless.

[Be sure to visit the Cannonball Read main site!]
Posted by Lisa Bee at Monday, August 18, 2014 No comments: 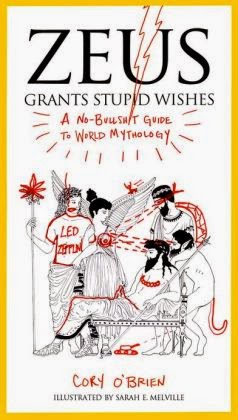 “Hey, is there a female version of wingman? Wingwoman sounds awkward. I’m coining a new phrase: Titcaptain. Tell your friends.”

This is it, that book that became a sensation because of Tumblr. And that is in fact where I first found out about it too, only to be so intrigued by the hilarious chapter titles (ie, “Ganesh is the Very Definition of an Unplanned Pregnancy”) that I had to read it.
Essentially, Zeus Grants Stupid Wishes is a collection of a few myths from various cultures and religions, but told in a somewhat non-canonical but still reasonably accurate manner (the degree of keeping canon to the source material varies from story to story and the author’s familiarity with it, it seems). And the manner of retelling is absolutely hilarious, as though some bro just got really jazzed about some myths and HAD to tell you about them because they are so strange and interesting: O’Brien doesn’t hesitate to mention how weird and random these myths are, no matter what culture or religion they are from, spanning from Japanese to African, from American History legends to Native American creation, Christian biblical tales to Buddhism and Scientology, and even some evolutionary science of the creation of the universe. But what ties these stories all together is how themes and personas seem to crossover between many cultures, and the ridiculous “moral” to each story that is added to the end, such as: “although the temptation may be great, you should not assume that everybody you meet is a shape-shifter. It is almost as dangerous as not assuming everyone you meet is a shape-shifter."

The neat little wrapup that is provided at the end of the book is also a nice touch (although quite a shift in tone), as it basically summarizes the idea that no one way of looking at these things is necessarily correct, and all these myths and stories have just been created by people to try and make an account for things that we may not be able to understand or explain in some ways.

Some of the cultures’ myths made no sense to me the way they were told (such as Egyptian, though I am not very familiar with these myths at all), while others were an absolute riot, such as Greek and Norse in particular which I do have a little experience in learning before. Basically, it’s the even cruder and non-censored version of these myths told in the most outlandish way possible, and if you are familiar with the myths to begin with you can’t help but laugh and think, “that’s it! That’s exactly what happened!”

I will admit, however, that reading this in one shot might be a bit much: the humor gets a little tiring at times if you read too much at once, so I would suggest doing it in small installments (which is easy as each chapter is reasonably short and quick to read). I can also see how this humor is not for everyone as well; it’s a little coarse at times, but honestly I just heard myself while I read in my head, and the way that I like to explain stories to my friends in the most flippant and excitable manner. All in all, however, I laughed out loud a few times, and would recommend Zeus Grants Stupid Wishes to anyone who enjoys mythology and all the wacky stuff that happens therein.

[Be sure to visit the Cannonball Read main site!]
Posted by Lisa Bee at Sunday, August 10, 2014 No comments: