#CBR5 Review #27: Dear Girls Above Me by Charlie McDowell 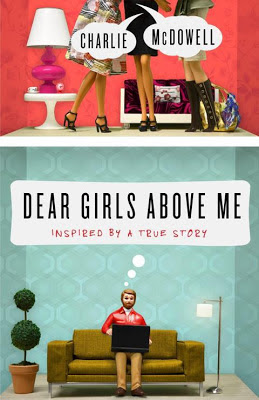 Come for the girls, but stay for the Charlie.

I don’t know how I stumbled upon it, but a while back I started following Charlie McDowell’s twitter account (@CharlieMcDowell) which is basically just a series of little “letters” he writes to the two girls who live above him, in response to some of the inconceivably vapid comments they make. After enough time and following, it appears he decided to write a book inspired by his life under these girls, and the result is absolutely hilarious. No seriously, I actually laughed out loud at a number of parts, and kept getting asked (by my mother, yes) what exactly was so funny. What really sold me on this book was not the girls who sparked the story and the things that they say, but McDowell’s writing. I wouldn’t say that his humor is for everyone, but I personally find him to be clever and an absolute riot: a seamless blend of self-depreciation, wit, and absurdity.

In terms of a story, Dear Girls Above Me begins with Charlie recounting his recent breakup from a long-term relationship, and how he felt slightly lost after this: enter the girls above him, whose everyday lives and conversations can be heard incredibly clearly in Charlie’s apartment, yet they appear to hear little, if anything, from him. At first, Charlie finds the girls to be an irritating nuisance, but soon he starts to find enjoyment in their conversations, and it almost seems as though he begins to care about them a bit, despite the fact that he pokes fun at their expense all the time. The girls are characterized as twenty-something party-girls, unmotivated and living off their parents’ money. While we may have an immediate, stereotypical valley-girl image in our heads of them, Charlie is sure to give them their distinct personalities and appearances, and basically says that they could be just any girl on the street, and you would likely never know that they say these things and act this way unless you got a real, personal look into their lives (like McDowell now has, living under them). He also makes sure to acknowledge his own faults and privileges in life which may parallel theirs: Charlie’s parents are apparently two very famous actors, who he doesn’t outright name, but it’s not hard to figure out who they are, (and his stories of them are actually all the more hilarious if you have these well-known images in your head. At least I thought so, anyway); In any case, I think it was very valuable for McDowell to add a critical look of himself to the novel, lest the whole “Girls Above Me” thing turn into more of a mock-fest, and less of a learning experience. Because it is through the girls and some of their little outlooks on life that Charlie begins to learn about himself, women, and some new rules of dating that he may not have been up to speed on during his past, long relationship. Other than this, there isn’t an immense amount of action in the novel, but that doesn’t really take away from it at all, as it’s less about what happens, and more about what is said and thought about.

While the tale of Charlie’s post-breakup, under-girl life is apparently “inspired” by true events, some things definitely come across as outlandish or embellished. While certain setups in general seems to be only happening for the sake of story progression, the exaggerations I really didn’t mind, and actually felt added to the humor of the whole thing. In fact, in the acknowledgements after the novel, McDowell makes a point of stating that there were certain exaggerations, and how he learnt how to tell stories from his father who added embellishments along the way to make a good story (basically the plot of Big Fish). And it does make for a good time and a good read. Oh, I’m not saying that there are any great ideas swimming around in here, though the nature of humans and personalities is examined a little bit, which adds a slight weight to the whole thing, despite the ending which seemed to sneak up on me far too quickly, as I just wanted there to be a little bit more to it.

In general, however, Dear Girls Above Me is a fun and easy book to read. While some may find more enjoyment in the schadenfreude of hearing the idiocy of the girls, my favourite aspect of the novel was McDowell’s responses to them. As I said before, it is his quick and amusing writing that made me enjoy the book the most, and if you are looking to laugh, I’d definitely suggest picking it up some time (as well as following the original Twitter account, as well as Charlie’s personal one which is just as hilarious, if not more so, @McDowellCharlie).

[Be sure to check out more reviews on the Cannonball Read group blog]
Posted by Lisa Bee at Saturday, June 15, 2013